6 Halloween Ideas for Your Garden 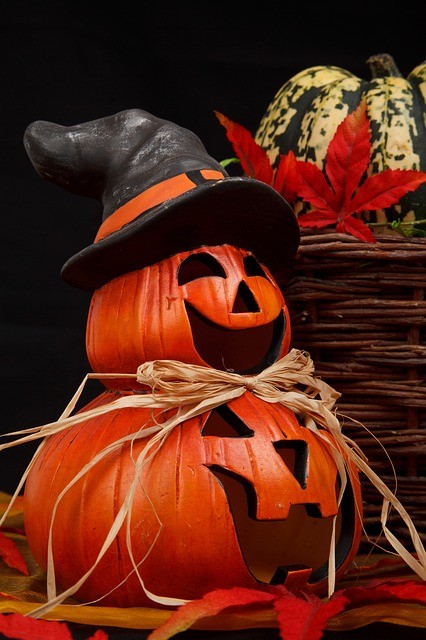 The tradition of Halloween apparently stretches all the way back to the early pagans and is typically linked to the Celtic festival of ‘Samhain’, which comes from the Old Irish for ‘summer’s end’.

This festival would mark the end of the harvest season and the beginning of winter, or the ‘darker half’ of the year.

It was also said to have been when the boundary separating us from the underworld thinned and souls of the dead returned home for one night of the year.

In the 19th century, Halloween was celebrated throughout Britain and Ireland with festivities such as nut-roasting, apple-bobbing, fortune-telling, dream interpretation and the lighting of bonfires.

Our American cousins changed some of the traditions when they began to celebrate the festival at the beginning of the 20th century, introducing the concept of ‘trick or treating’.

Although enthusiasm for celebrating Halloween in the UK dwindled throughout the 20th century, it seems that now, with each year that passes, us Brits are taking Halloween more and more seriously, with dressing up in scary costumes, attending Halloween-themed parties and trick or treating becoming the norm.

And quite rightly so, as Halloween can be lots of fun for both children and adults.

At this time of the year many of us are searching around for ideas to help decorate our gardens and homes ready for when 31st October comes around, to attract (or scare) trick or treaters that may be passing by.

If that sounds like you, then you’ve come to the right place, as in our latest article we are looking at various ways in which you can transform your garden in time for Halloween.

The majority of the ideas cost very little money, if any at all, and can be lots of fun to get involved with, so let’s jump straight in with our first idea. 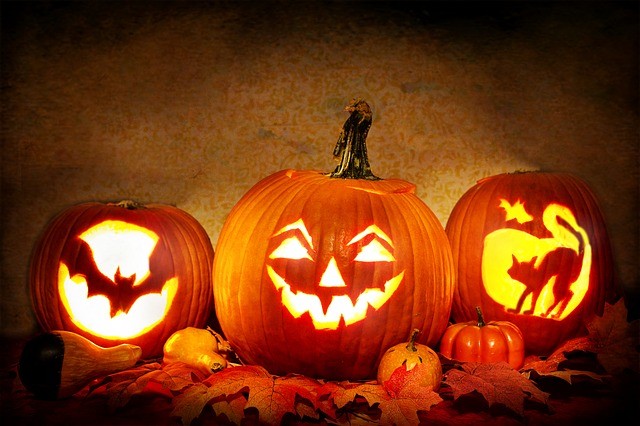 We thought the best way to start our list was with a classic!

Carving a pumpkin to create a ‘jack-o-lantern’ is probably the first thing that springs to mind when many of us think of Halloween. It’s certainly a lot easier to do than the old British staple – the turnip lantern. That really is a task that’s hard on the hands!

It’s pretty difficult to miss pumpkins at this time of the year, with many shops and supermarkets offering gourds of all sizes at low prices.

Each year, social media is alive with people sharing pictures of their creative designs and it’s a good place to get ideas for your own pumpkin, too.

Once carved, placed a tea light inside to light up your pumpkin on Halloween and leave it in your front garden to impress the trick or treaters.

And, rather than throwing away the fleshy inside of your pumpkin, why not use it to make a pumpkin puree by blitzing it in a food processor? This can be used to give pies, soups, pancakes and desserts a fantastic flavour. Alternatively, many people recommend using it as a DIY face mask to improve the skin!

Inspired by our traditional of decorating our front doors at Christmas, a more popular trend that is gaining more traction each year is to decorate your front door for Halloween.

Lots of people are getting creative here and decorating their front doors in various ways. 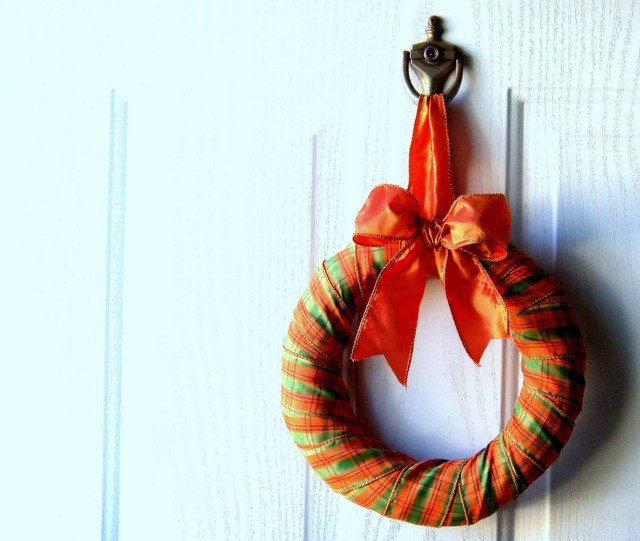 Some people are opting for a simple Halloween wreath, whilst others are letting their imagination run wild and creating more scary decorations. Fancy a front door mummy? You could use toilet paper to create an evil-looking monster, such as in the picture below. 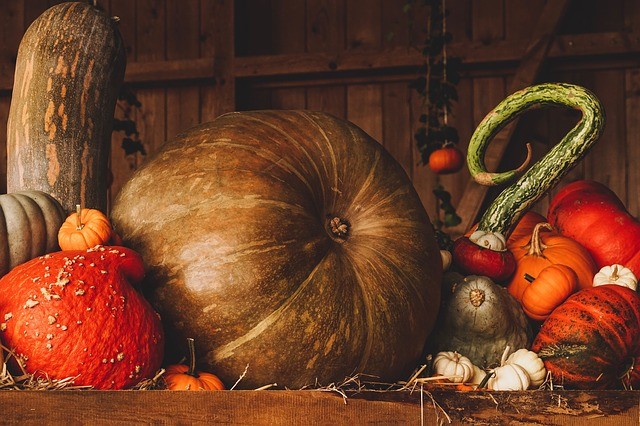 You don’t necessarily have to decorate your garden to look scary at this time of the year.

By getting creative and using autumnal squashes and flowers, you can create a stunning outdoor display that is sure to impress.

Why not place various types of squash into wicker baskets to create a beautiful autumn display, such as in the picture below? 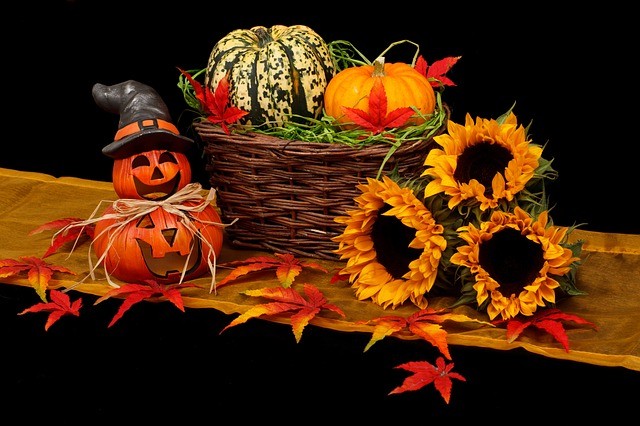 Let your imagination run wild with this one and you can be sure to create a display to be proud of.

The great thing about an autumn display is that you can leave it in your garden for a few weeks, rather than just the night of Halloween, to really get the most out of your handiwork. 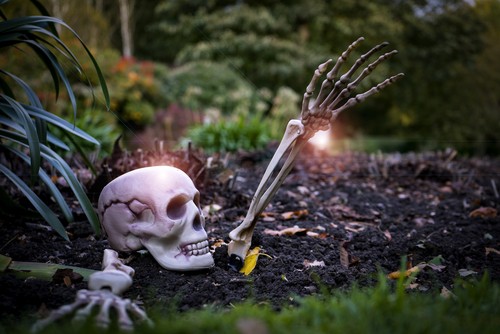 One way to create a scary scene in your garden is to get your hands on some fake body parts, or perhaps even a skull and some bones.

These can simply be placed on the ground to look like someone has been buried in your garden, or as if they are trying to crawl out of their grave.

To enhance the effect further, you could even make a tombstone out of recycled cardboard or polystyrene – paint it grey and inscribe ‘R.I.P.’ on to it, for best effect. 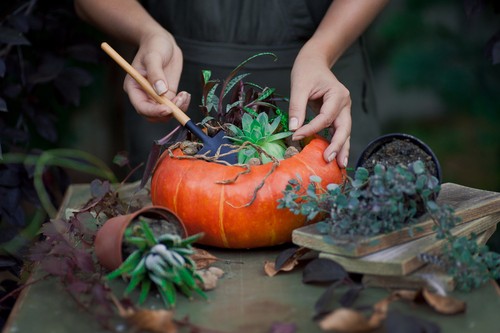 Rather than carving faces or patterns into the side of your pumpkin, you could use one as a plant pot.

Slice the top off a pumpkin and scrape out the inside, then backfill with compost and plant some autumnal flowers to give your garden some colour in time for Halloween.

These quirky pots will look great in your garden, on your doorstep or even indoors, too.

6. Get a Spooky Doormat

Why not replace your usual doormat with something a little more appropriate for the time of the year?

Halloween themed doormats can be picked up from your local discount store at a relatively low cost and will be sure to make a great first impression on your party guests or trick or treaters.

You can combine this with your door decorations and carved pumpkins, described earlier in our list, to create something that is sure to amaze the neighbours.

Celebrating Halloween can be lots of fun for both children and adults, so why not get involved and transform your garden with some spooky decorations?

Many of the best ideas don’t even need to cost any money and you are really only limited by your imagination when it comes to decorating your home and garden ready for Halloween.

We hope that our ideas have helped give you some inspiration for creating your own spooky garden display.

Do you have any other ideas that we should add to our list? If so, we’d love to hear from you and you can join in the discussion by leaving us a comment below.

View Our Artificial Grass
Change Location
To find awesome listings near you!
We use cookies to ensure that we give you the best experience on our website. If you continue to use this site we will assume that you are happy with it. I'm ok with thatPrivacy policy